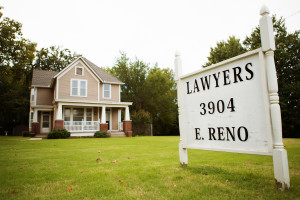 The firm has been located at its present location since 1982. The office building was originally constructed as a farmhouse in 1904. Since the structure was built before statehood it is one of Oklahoma County’s rare and unique Territorial properties (those built between the opening of Oklahoma Territory in 1889 and Statehood in 1907). Mr. Coleman purchased the property from a grandchild of the original 89er who laid claim to the property in the Land Run of 1889. With the help of law partners Geary Walke and Stephen Briggs the farmhouse was transformed into a law office while maintaining its historic character and charm.

There have been a dozen attorneys practice out of this location over the past three decades including three sitting area Judges. Mr. Coleman has also served as Del City’s Municipal Judge for eleven years and as its Associate Judge four years prior to that. The firm presently consists of Steve A. Coleman and Matt Blue. Also practicing from the office on a part time basis is Steve J. Coleman, the son of Mr. Coleman, whose primary office is located in Lawton Oklahoma.